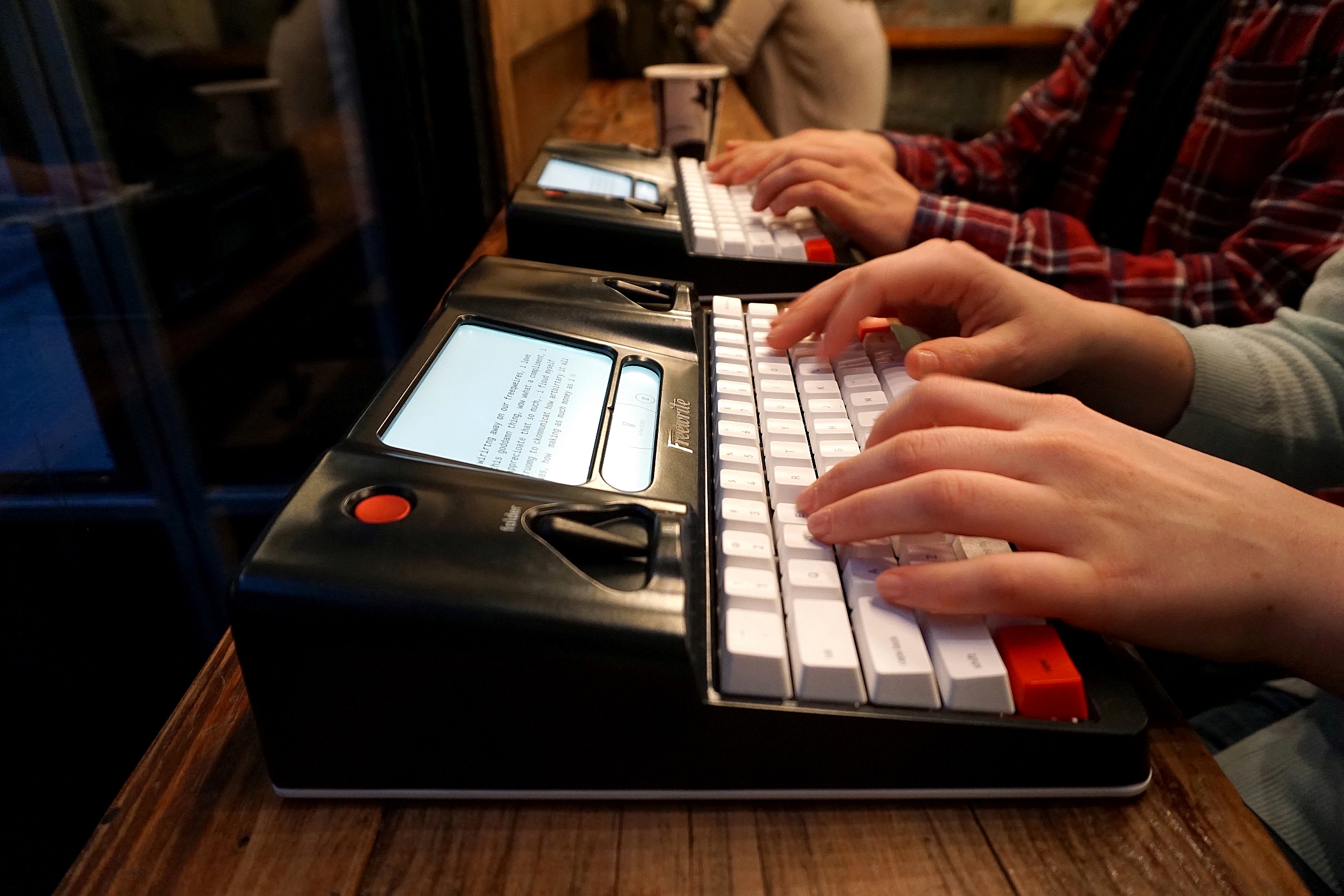 Today I've unwrapped an Austrohaus Freewrite. Half a year ago I was feeling a bit overworked. I'm privileged in that I love my work a lot - so much that if I don't restrain myself it can eclipse the private life. As a result I was looking for new hobbies. Hobbies that wouldn't involve computers so much. At the same time, I enjoy myself the most when I'm doing something useful-ish.

I thought I'd really enjoy writing more. However, sitting behind a laptop it's easy to fall into the trap of checking email, Slack, or doing research. Before I know it I'm lost on Wikipedia, or Facebook. Those activities have their time and place but I didn't want them leaking into my hobby. I wanted to enjoy some quiet time with just my brain.

You're thinking: "So, use pen and paper". They too, have their moments, but I'm so spoiled by tech that I can't stand the inefficiency of my deplorable handwriting, nor the thought of having to transfer that writing to my blog somehow. I wanted to remove barriers to encourage writing - not add new ones.

So half a year ago I started searching for a low-tech, low-distraction typing machine that could sync with my computer somehow. There are apps that disable distractions, but my brain knows how to disable the app and it will just become a battle of restraint again. I thought of getting a cheap laptop and strip it from GUIs, webbrowsers, etc. Just a command-line editor and Git/Dropbox. But it'd be so tempting to install more and more tools on it. It's a computer. It's hard to look at it without seeing all the lost potential. Then I found out about the Freewrite. It was exactly what I was looking for: a typewriter with an e-ink screen and Wi-Fi. The Wi-Fi could only be used to sync to Dropbox-like-services. 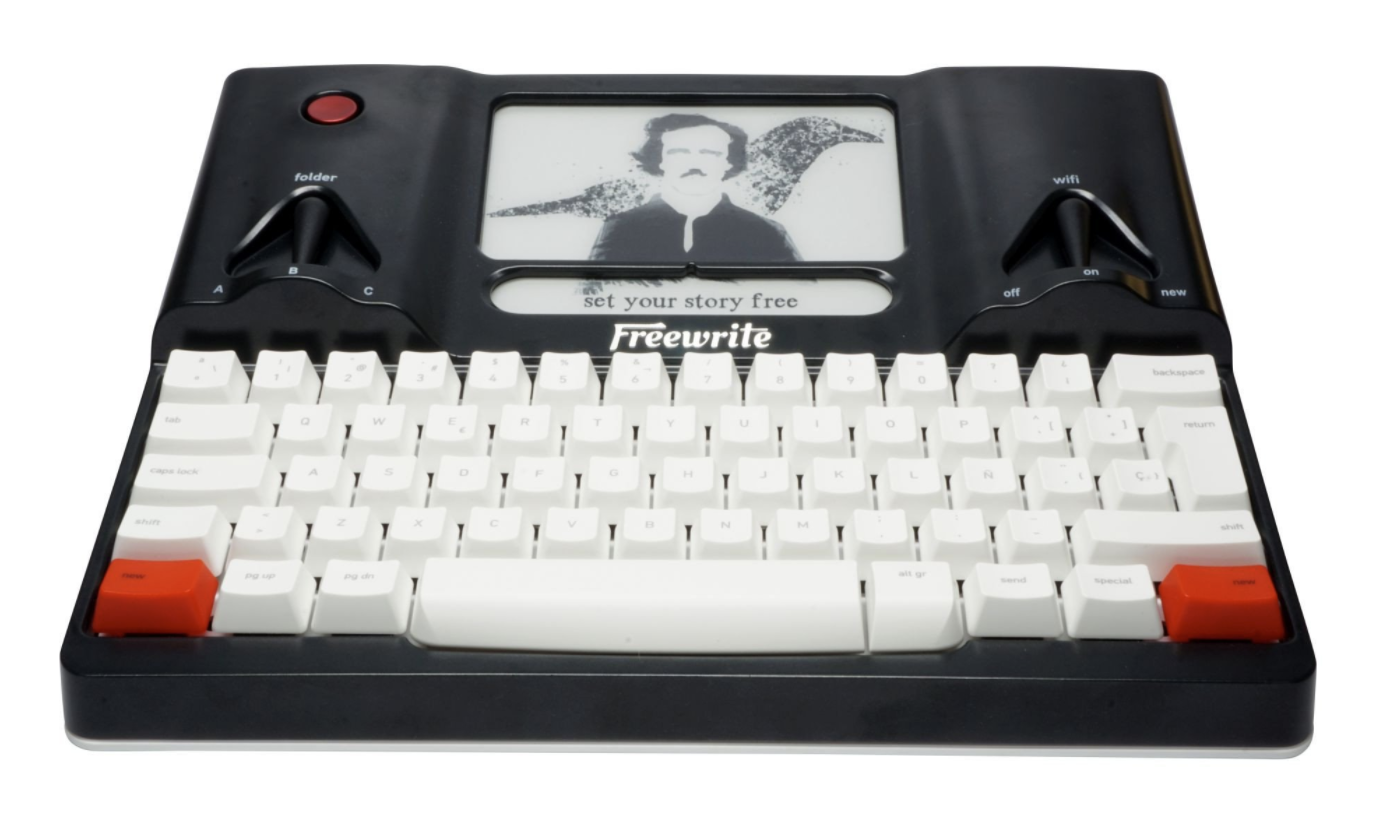 I ordered it on a bit of an impulse half a year ago. They had construction delays and struggled with high demand, and it now only arrived today.

This is the first post I write on it. First impression: I don't think it's particularly pretty. It's expensive. It doesn't have a cursor: make a mistake one paragraph up, and it's Backspace all the way to there.

That last one is tough to swallow. On the Freewrite website they say it's a feature. Something along the lines of: "Writers never had the ability to do this. Knowing that 'undo' is hard, makes you more mindful and deliberate about what you type next, it encourages deeper thought. Not going back and forth keeps you in a creative flow. Just use your computer for the final editing in your Dropbox".

So what else is good about the Freewrite?

Well I wrote this blog post, and I can say it was a relaxing experience. It was painless to set up, the keyboard feels nice & retro, and not once did I (have to resist an urge to) switch to something distracting. When I sit down behind it: I'm writing. I commit to the act, until the brain has flushed all of its thoughts and the post is finished in raw form. Before I publish I take a real computer and fix errors, move bits around, try to remove redundant words.

I am cautiously optimistic that it will encourage me to write more. I hope I will, otherwise at $419 this has been one hell of an expensive blog post, as well as probably the most expensive way I've ever kid myself

I suppose this can be regarded as a product review. To be clear: I've never taken any money or other rewards to say anything on this blog, I never will, and this is no exception.

Update 2018-09-25: While I've written some rough thoughts on the Freewrite, and also had a lot of fun typing on it as a toy with my daughter, I haven't released a single blog post since this adventure, so definitely an expensive way to fool myself :) 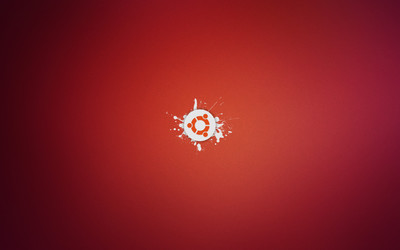